A Jewish Voice from Ottoman Salonica


Historians Aron Rodrigue and Sarah Abrevaya Stein are the co-editors of A Jewish Voice from Salonica: The Ladino Memoir of Sa'adi Besalel a-Levi. Sa'adi's memoir survives as a rare firsthand account of Ottoman Sephardic Jews of Salonica, a society that was to be annihilated during the Holocaust just forty years after his death.

More here.
Posted by Ted Swedenburg at 1:26 PM No comments:

NPR did a story last Saturday on Lucette Lagnado's new book, The Arrogant Years, which deals with her Egyptian-Jewish family's struggle to adapt to life in the US, where they moved in the early '60s. It's a follow-up to her wonderful book about her family's life in Cairo, and their exit, The Man in the White Sharkskin Suit. It is notable for not adopting what Joel Beinin has called the "neo-lachrymose" attitude toward the condition of Jews who lived in the Arab world, one that tells a story of constant suffering and oppression. I've not read Lagnado's new memoir, but the NPR story will push me to have a go at it. Here's a quote from the NPR story, which exemplifies how far Lagnado's take on Jewish life in Egypt is from the neo-lachrymose. 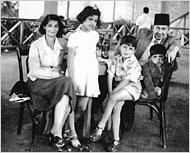 "Once upon a time, there was an Arab culture that was flourishing and open and cosmopolitan; where people spoke several languages, where Jews and Christians and Muslims worked together, and socialized together, and went to school together. And come the end of the week, they would go to pray in their respective houses of worship," she says. "I don't want to idealize Egypt too much, but it really was a very extraordinary, very special society, once upon a time."
Posted by Ted Swedenburg at 7:03 AM 1 comment:

Ted Swedenburg
Professor of Anthropology, University of Arkansas. Author of Memories of Revolt: The 1936-39 Rebellion and the Palestinian National Past. Co-editor of Palestine, Israel and the Politics of Popular Culture and of Displacement, Diaspora, and Geographies of Identity.